A parcel to the north will instead be joining other acreage McGarvey donated in years past to the North Florida Land Trust. The parcel is part of the Guana River State Park wetlands, which provides critical flood protection for the area and habitat for native species.

The veteran developer is not required to set this latest property donation aside as part of a wetland’s mitigation plan. He’s simply continuing a long-standing tradition of preserving what makes Florida a special place to the people who purchase homes here: its natural resources.

“It’s what makes Jay a very extraordinary person. He gets it,” said Jim McCarthy, executive director of the North Florida Land Trust. “He could build on that land, but instead, he’s decided it’s for everybody’s benefit.”

Conservation in Northeast Florida is in a race against time, said McCarthy. Development is happening quickly—faster than money is pouring into the Land Trust’s coffers. 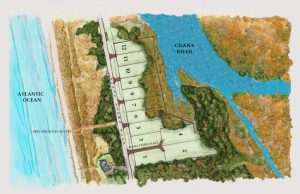 In that race, McGarvey has been a leader among developers.

He kicked off the Land Trust’s preservation of the Guana River Preserve in 2004 with a donation of 39 acres, and then persuaded fellow developers to come forward with contributions of their own.

“Jay was really the impetus for that whole Guana River preserve,” McCarthy said. “What he has done goes above and beyond.”

The Guana River Preserve is a critical part of the community’s ecosystem. Marsh grasses take pollutants out of the water. And, each acre of marshlands can hold up to 1.5 million gallons of flood water. That’s enormously helpful to people living downriver, McCarthy said.

He pegs the economic benefit at $1.6 million.

McGarvey’s commitment to quality of life in Northeast Florida extends to other philanthropy as well.

As chairman of the Board for the Beaches Habitat for Humanity, he oversaw the conceptualization and development of Ocean Walk, a 70-unit community for low-income residents on Mayport Road in Atlantic Beach. McGarvey also donated funds for historic preservation of a community building in St Augustine Beach and for the construction of St Augustine Beach’s Splash Park.

He donated land for a nearby library and provided landscaping for all St. Augustine Beach medians along Highway A1A.

Since 1980, the focus of McGarvey Residential Communities has been to “build communities that last for generations.” As a result, they have developed some of the most enviable neighborhoods in North Florida. Now, add Ocean Ridge and Marsh Dunes II to that prestigious list.